As always, I’m a little behind on this article. There was a lot of interest generated recently in Patrick Boylan’s weight cut pictures, particularly the pictures of the weigh-in and 24 hours later after he had re-gained 7kgs.

As weight cuts go it was very straightforward – Patrick had 10kg to lose, he was carrying a little more weight than normal. He was disciplined and followed the plan to a tee, so it was plain sailing. Going by his facebook status updates after his win, the next weight cut may be a little more severe…

Weight cutting is a very common, generally misunderstood but vital component of Mixed Martial Arts. The Americans in particular are great at this and in my opinion have a huge advantage over the rest of the world. A lot of American MMA athletes have a background competing in high school wrestling and have been required to cut wait and compete in sub optimal states from a very young age. This hardship – both physically and mentally forges very resilient athletes but the body also becomes more efficient at cutting weight with practice.

I have been working with MMA athletes for the past few years, mainly with Team Ryano and will, for the most part, go through the tactics used for Patrick’s recent weight cut at Battlezone 6 and how he went from 14% bodyfat at 71kg to 7% at  61kg, just before he weighed in to fight.

I also want to underline that nothing here is new or original. There may be people out there selling seminars on how to do this but all the information is found online, it’s just a matter of putting it together and having the experience to know what to do when troubleshooting needs to be done.

I started working with Patrick just under 8 weeks out from the fight. I won’t go much into the strength & conditioning side of things in this article but I am keen on an 8 week camp as I feel a longer camp increases the risk of injury, possibly over training or peaking too early and mentally it can become a greater challenge to stay focused – but having said that, it is ideal that a fighter is disciplined enough not to stray too far from their fighting weight.

I will just deal with the diet protocols and more specifically the weight cutting protocols. Changes in training and particular energy systems were used to help manipulate and drop bodyfat levels but that is outside the scope of this article… 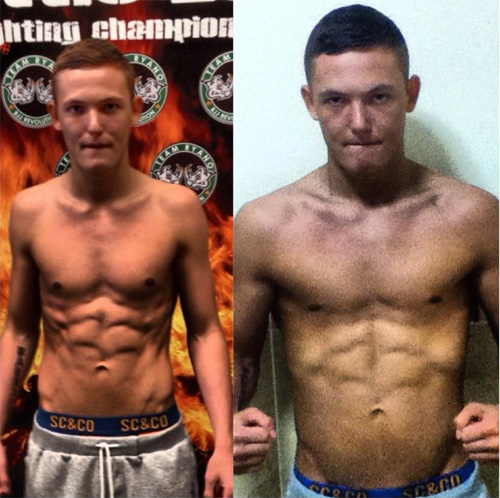 Initially with Patrick we looked to cut all refined carbohydrates, particularly sugar out of his diet. This is simple and again, everyone knows that this needs to be done but when athletes are training full time they can get away with eating shit. Not only will this change begin to improve body composition, it will help with recovery which is vital when training in MMA where there is a huge potential for injury.

Water intake was increased to at least 3 litres per day.

Protein intake was also increased – I didn’t get too strict with protein shakes but this would be something I would look to limit in the coming weeks. This is another thing that athletes are trigger happy with. I would encourage people to steer clear of liquid calories when trying to improve body composition as it can mess with insulin levels.

Also initially, constipation became and issue (sorry Patrick!) and this is very common when a diet is changed suddenly – there must have been a lot of processed foods before hand as this was an issue for a couple of days. We introduced some flax-seed into his diet and after a day or two the extra fibre got everything running on order again. This again will help with dropping excess weight.

The only additional supplement taken was ZMA before bed as this would help buffer his immune system, help with sleep and improve recovery.

Protein shakes were restricted to post training. Meal portions were lowered – this was monitored along with energy levels during sessions and recovery. If either dropped significantly, the portion sizes would be increased slightly. Also carbs were restricted to post training. At this point, breakfast consisted of protein and fats – no carbs. And the last meal of the evening contained little or no carbs.

I wanted Patrick to cut out all protein shakes. Fruit, which was eaten directly after the first training session of the day, was now cut out. Here are some notes from the final week…

Wednesday 63.7kg – We dropped the water intake back to 4 litres per day, the theory here being that the body still has to adjust to the drop in intake and will be excreting fluids as if it was trying to deal with the 7 litres per day. The last meal by 6pm and bed early.

Friday 62.6kg – went to the sauna to lose the remainder. There it was 5 minute blocks, twice and that was all it took.

During the last week I was happy with Patrick’s weight and we didn’t need to bring in diuretics or any extra roughage to help clear the digestive tract out. We  actually left coffee in his diet throughout the 8 weeks as I didn’t have the heart to take that from him – as long as it was first thing in the morning or pre-training. We tinkered with food as the energy levels changed but there were no drastic dips, the aim was to make the 8 weeks as painless as possible.

Also I wanted Patrick to have to use the sauna as little as possible and it was down to his discipline that we got to a point where all it took was 2 x 5 minute blocks to complete the job.

The weigh-in was at 11 in the morning. I had made a recovery drink for Patrick to start sipping on immediately after he made weight. It consisted of a combination of dioralyte, some simple carbs in powder form and 2 litres of water – to be consumed over the first hour. Then a second bottle was made to be consumed in the second hour. It was a challenge to stop Patrick guzzling the drink straight away as this would cause bloat and stomach distress.

There was to be no solid food eaten until these drinks were taken and at least 3 hours had passed. Even before then Patrick said his urine was clear and that he had a standard bowel movement so that was the green light to get eating.

Again, even though the temptation was there to gorge, we stayed sensible. The main meal of the evening  and treat consisted of a Nandos chicken (no spicy sauces), sweet potato mash + lots of olive oil.

As far as cuts go, it was text book. There were no major blips along the way, only a few minor issues that were resolved quickly. Patrick stayed to the plan and didn’t panic at any stage through the cut (which can be a common pitfall) and a huge part of the process running so smoothly was down to his will power and discipline.

Patrick won the first round by referee’s stoppage and although he didn’t get a chance to showcase his fitness, he stated afterwards that he felt strong and relaxed throughout. 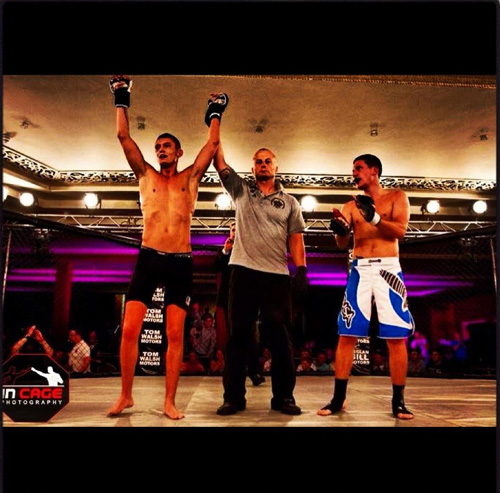 As an aside, there were no other ‘hacks’ or any more drastic measures taken, it really was that straightforward (this is the situation in most cases fitness related). Being in Patrick’s situation, he was getting a lot of advice from different areas and there were a few suggestions as to trying to elevate testosterone levels – legally of course. I have attended Charles Poliquin’s Biosignature certification and am aware of the body fat sites relating to testosterone levels. It is very rare that someone in Patrick’s position would have low testosterone. It is something I would see frequently in males in their late 30’s with high pressure corporate jobs. If we take a step back and look at the subject in question, a 20 year old male who is training full time and doesn’t have to work, doesn’t have any kids to support, who trains in a testosterone fuelled environment, testosterone will be oozing out of his ears. Focusing on small details and not dialling in the basics first is a case of not seeing the woods for the trees.

Bar the small pearls of wisdom that come with time spent in the trenches with athletes, none of the information here is new or groundbreaking. I have had the privilege with working with some of the best coaches in the world and spent hours of time researching and reading. In this instance I would like to credit , in particular, the works of Dr. John Berardi, Mike Dolce and funnily enough, the sherdog.com forum, where amidst all the idiocy, there are some very knowledgeable people.

If you are looking to cut weight for an upcoming fight or looking for an 8 week diet and strength & conditioning plan, don’t hesitate to get in touch for a free consultation – don’t forget we train athletes remotely too (and not just for MMA) so location is not an issue. Contact us for more details.