A while ago I wrote a piece about putting a value on a service and yesterday I had a few experiences which led me to once again open up this can of worms.

Earlier in the day I went into town to get a poster printed for the gym. I decided to go to well known printers on Nassau Street, called Reads (in case the initial clue wasn’t enough).

I was stuck for time and probably not in the best frame of mind to go through what followed. As soon as I entered the door I was hit with a mish-mash of posters and signs on every wall, each sign with directions as unclear as the next. Boxes on floors, staff running around the place like headless chickens and basically a feeling of disarray and chaos.

People that know me know that I am far from organised but even I like a small bit of order. This was absolutely ridiculous, people were jumping from one queue to another, the air of frustration increasing, the shitty radio station was blaring, the staff were having a great old time looking busy jumping over scattered boxes, badly singing to whatever crap was playing on the radio, all while doing their best to ignore customers completely.

I eventually got to talk to a staff member or have one that would acknowledge me and I asked to be pointed in the direction of the queue I was meant to be in. Well I got pointed toward a side room and was told to take a ticket and take a spot in a queue that looked like it belonged in a GP’s waiting room. So I just left.

Nowadays, being a business owner I notice things like customer service which, truth be told, I would have never have really bothered about before. These days it absolutely astounds me that businesses are run like this. In my job, if I deliver a sub-par service or product, I know I will lose customers. 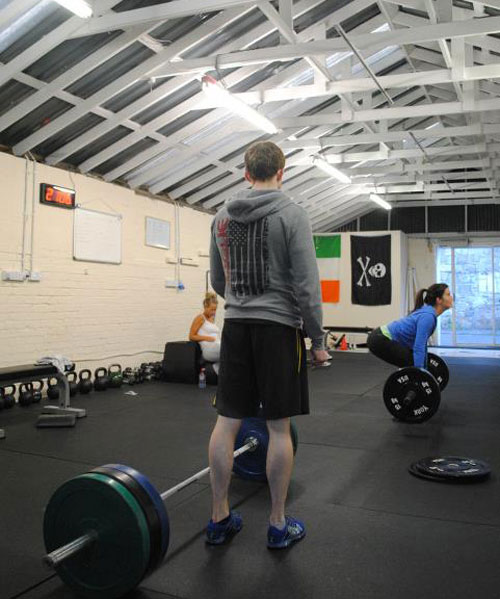 Coaching, not something you see everyday in a gym...

Reads is obviously a place that charges next to nothing for products and the trade off is a terrible customer experience / service and I can’t vouch for the end product as I didn’t stick around.

We are seeing a similar thing in gyms. Quite often I want to pull my hair out when I get people contacting me and trying to bargain and haggle prices with me. I see places like Ben Dunne pop up and charge something like €30 a month. This would be absolutely insane if they were providing the same service as me – which they aren’t. And I would never dream of getting into a price war as I offer a totally different experience in my gym – which, I understand, a lot of the general population ‘don’t get’, that’s fair enough – if enough of you pool together and sign up at the same time at Big Ben’s gym, I think he actually pays you.

This is another frustrating problem, to the majority of people, a gym is just a gym and why the hell should I charge €100 per month when such and such a gym down the road charges €30 per month. I don’t know… go there for a year then come back to me and let me know how well you got on.

You see, these gyms are similar to Reads. All blow and promotions about lowest prices but customer support, service and the customer experience itself is zero. Why should it be anything else when you pay next to nothing?

If people are looking for a cheaper deal, then immediately I know they don’t value their health, plain and simple and it is a way of thinning out the weak in the pack. Instead these folks will exchange a monthly gym fee for one evening out on the piss. Priorities well and truly in place.

And don’t get me started on Groupon…