Following chats with a lot of people recently, especially alcohol induced ones on the night out I thought it would be beneficial to write a small (ish) piece about my SDSC experience as many comments made by people to me in the gym particularly relating to their training goals sound very familiar to me.

I started training in SDSC in its early incarnation in Kenilworth lane over two years ago. I showed up on a Friday evening for a chat with Dave who talked me through his gym ethos and briefly ran through his training philosophy, I must admit much of it was alien to me but he was passionate, seemed knowledgeable and so I decided to give it a go. I had been involved in rugby since the age of 12 and considered myself reasonably fit when arriving on his doorstep.

My goal was to train with Dave on the rugby off-season that summer, to work on my strength for the season ahead. While never the most talented of rugby players I always felt I could compensate for my lack of natural talent and questionable ball skills with my fitness and strength, basically, I liked tackling people repeatedly. My eyes were opened on what I considered to be fit over those summer months.  Dave put me through my paces and my initial intention of using Dave to help me in the short term for the summer (then dump him like yesterdays newspaper) changed quite quickly. I had initially intended to train 2-3 days a week in SDSC for an 8 week period but very quickly started showing up for training every day. 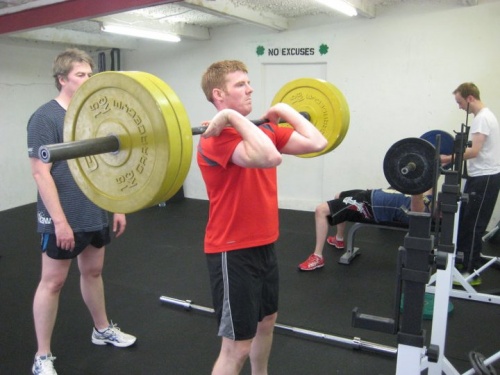 Ross back in Kenilworth Lane

Some evenings I would show up at the gym tired, stressed and low in energy but after round 2 of the warm-up I would get into the training. I knew the others training felt the same. It was the cursory grunts & pleasantries exchanged early in the workout without any real interaction that was a giveaway, but by midway through the workout the gym would get louder, the banter would start, people would start chatting, give each other support and shit in equal measure, and by the end of the session, everyone was leaving feeling worked but invigorated.

As I got stronger and better at certain lifts and moves I would read up on everything I could on the movements,  how I could improve them and that evening quiz Dave on what I had read and whether I should implement it or not. I am that kid that asks why is the sky blue. As a coach he was always receptive to the discussions but tried to encourage me to rein it in slightly and to progress steadily rather than trying to get better at everything at once. From the start his philosophy was long term, gladiator-esque i.e. it should “echo in eternity” rather than short term “sure just jump in, give your all & feck the consequences”.

Looking back at this period my initial training goals were unrealistic. I had no real concept of short term and long term training goals.

For those in the gym in those early days, you will remember around 18 months or so ago we put our goals for the year up on the wall. At that time my goals were to get my squat to “x” my deadlift to “y”, clean to “Z”…. the list went on. Basically I wanted to nearly double my PR’s in most lifts in 12 months. On top of this I was rugby training twice a week and playing a match every week. My only day off from training was a Sunday. It doesn’t take a genius to realise something had to give. Against Dave’s advice I kept pushing and pushing to meet these goals on the wall and my body started to give in. I started getting small niggling injuries; pain in the shoulder, twinge in the elbows and knees, soreness in the hips.  Despite Dave’s recommendations   to dial it back slightly and start light I wouldn’t listen. As is all too common I like to be advised on how to work out and what to do but if that advice involves doing something I don’t like, I choose to ignore it.

Needless to say it didn’t take long for this to take its toll and for a period of six months I was plagued by injuries which stopped me from playing rugby and doing any meaningful training. I went to specialists and doctors who could not diagnose correctly what was wrong and advised I stop all sports or may need hip surgery.

This was a huge wake up call. I decided to actually start listening to the coaching I was getting and with the help of Dave and Stephanie in The Priory Clinic I started to get a handle on my many limitations and the root cause of my injuries. With their guidance I started researching everything I could on improving myself and made a concerted decision to not let the people I was training with dictate the level I should be training at or the setting of my goals.  I decided to completely revaluate my training goals.

My first immediate goal was to improve my hip mobility that would allow me to train pain free.

I started seeing great progress by returning to basics and addressing my underlying issues which were complete muscle imbalances and restricted mobility. Low and behold my movement improved and my injuries started to subside.

I then also re-evaluated my short term training goals.  As mentioned for a long time I felt that every session I had to train maximally to get strong, i.e. every session I had to break a PR. My lifts went up for a while but then stalled. I got frustrated by not prolonging the time for me to reach my goal. Now I realise I just have to train optimally. Breaking PR’s is a great motivator and adds excitement to my training. There is no greater feeling than lifting the heaviest weight on a given exercise and putting it up on the board or in my training journal. This however meant at every session I would lift as heavy as possible even if it was a new movement to me. Starting light and progressing gradually never came into the equation.

Frustration with my progress and my injuries prompted me to change my approach by forcing myself to start light and slowly progress on each exercise even if I knew I could lift a heavier weight. I realised slow progress would not give me the best rewards today but it would tomorrow. Even though I was only progressing by 2.5kg a week it still meant I was progressing instead of been stuck on a certain weight week in week out. I realised that wanting my bench press to go from 90kg to 100kg in 3-6 months was much more realistic than wanting to achieve that in 4 weeks. At the end of the year if my bench press only increased by 10kg it was still an increase compared to the guys that bench presses 80kg in every session and never improved. Training, while incorporating short term goals, is not of itself a 4-8 week goal, it’s a lifetime goal. If you accept this then progressing slowly is not a big deal. It now means you can focus on improving your lift by 5kg instead of 50kg. I now realise if I can add 10kg to my bench press every year I will be a happy man in ten years time.

During this period my passion for strength and conditioning was really ignited and Dave actively encouraged me to pursue this and offered to help me by letting me get involved in coaching in SDSC. 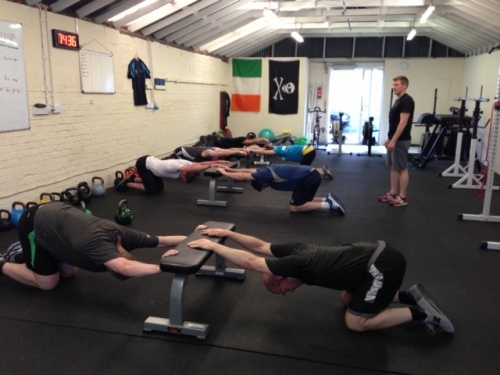 'On the other side' - coaching at SDSC

I set another goal about 12 months ago to become a qualified coach and start getting coaching hours under my belt and that goal has since been achieved. However like all goals it doesn’t stop there.  I now need to adjust the goalposts and strive to improve. I want to continue to increase my knowledge and abilities as a coach. That is one of the most important things I have taken to date from SDSC. I see Dave continuing on his training journey, visiting and training in facilities of likeminded people across the globe, constantly expanding his knowledge to use in his gym which is something I hope to try and emulate going forward.

My long term training goals are now exactly that, long term. My long term goals are to be able to train with my son, in any capacity he wants, as he gets older. That means keeping myself fit, mobile and healthy to be able to [insert whatever activity he enjoys here], and really hoping the activity is not ultra- marathon running.

This change of mind-set has helped me continue to make progress where I would have stalled long ago had I stayed on the path I was on.

I now have the pleasure of been involved in coaching and helping others work towards achieving their training goals. I can see why Dave loves his job so much in spite of the cold winter mornings and late evenings. It is humbling when you see somebody achieve their goals no matter how big or small and you were either a part of that achievement or merely a witness to it. It´s the knowledge that, that person set their goal and went about achieving it, knowing that it took hard work.

In SDSC people have come and gone, goals have been set and met but what has remained constant  is the great sense of community and that comes from a group of like-minded people training together, helping and supporting each other to meet their particular goals and long may it last!