This weekend just gone we had the privilege of hosting DR. Mike Israetel, Dr. James Hoffman and Dr. Melissa Davis from Renaissance Periodization for a seminar on Sports Nutrition and Recovery. The seminar was over two days and the level of information was second to none. I have attended numerous seminars over my 15 years of working in the industry and I came away with a tonne of information that I can apply to my own training and that of my clients straight away. The content of the seminar also challenged me to change the way I will prescribe and assess nutritional strategies in my own gym going forward. The weekend was absolutely an invaluable investment in my own career and business.

Day one started with a talk on body image from Mike and this in my opinion was going to be one of the most important lectures of the day. He mentioned that we were the first group to hear this talk – his dog aside, and as I said previously, I think this was one of the more essential talks of the weekend. The subject of this talk is the stuff that ties everything else together. Initially Mike defined body image and how it varies in depth and degree. He talked about the thorny topic of HAES (Health At Every Size) and how it is just plain wrong. The topic of training to attract the opposite sex was looked at too – lets be frank, most people train to look better naked and then the return on this investment was examined further and how much happier being ‘ripped’ will actually make you feel.

It is important to establish realistic goals and guidelines with the individual. This opens up dialogue and builds trust between coach and client. Over the years I have seen programs make or break depending on compliance and buy-in. This comes down to knowing what drives an individual and then using these internal motivators to help drive them to their goal. Coaching goes far beyond counting repetitions and working out how many sets to perform. Although some of the content in this talk may be deemed sensitive or un-pc to the ultra liberals today, it was truthful information – and a few swear words thrown in, which I always fucking appreciate. 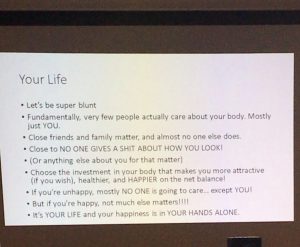 The second talk was from James and it was an introduction to Recovery Adaptive strategies. He started with a great quote from Dr. Bill Sands,

‘It is important to note that recovery-adaptive strategies and techniques are not sufficiently powerful to overcome stupid coaching, bad planning and a lack of talent’.

James also looked at recovery modalities and presented a nutrition recovery pyramid  – essentially calories being the (obvious) foundation. This is something I have seen in my own training frequently – and especially amongst coaching female athletes – not eating enough calories to fuel recovery or adaptations.

It was also worth noting that some folks think too much about recovery and they actually recover too much – to the point they actually blunt any adaptations and this is where MRV, MAV, MEV and MV need to be established. This takes time and careful observation, and is part of the artistry and craft of being a coach.

There were plenty of nuggets in this talk around fatigue and differentiating recovering from training and recovering from an injury, again content that will make me look harder at my own programming and specific training phases.

After that, it was Melissa’s turn to talk about Diet. The big take away here and something that the RP guys are so good at is structuring a significant maintenance phase in their dieting and even increasing calories slowly after such a phase to stabilise before going again. Melissa went into greater detail on how to do this, how long to take for maintenance and how to re-introduce calories to stabilise before starting another diet phase. This is something that I think does not not get enough attention in other diet protocols and was invaluable information to implement in my own training going forward.

We ended the first day with a Q&A session – this was particularly beneficial this weekend as it was a small group in attendance and everyones questions were answered, it was pretty much a personal session with the RP guys.

After we broke up for the day the guys came to SDSC to train and this is always a buzz for me. I always get self conscious of the gym as I am aware of the mega gyms these guys get to train in but at the same thing there is something honest and grounded about out place that adds to the charm – its always such a novelty to see guys that I have looked up to and followed online for years, training in our small little spot in Harold’s Cross and it shows how far we have come. I got to work in with James on some squats which was cool! 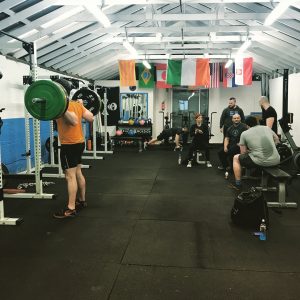 Mike kicked off day two (which was probably a good thing as the rest of us were nursing mild hangovers!) and he talked about Nutritional Fads and Fallacies. This was always going to be a topic that I was going to appreciate as I spend a lot of my time trying to debunk methods for members and clients constantly. Often times I joke that we are actually shit filters as all of the information anyone would ever need is online but we merely help distil the relevant information for each individual in order to save time and confusion. 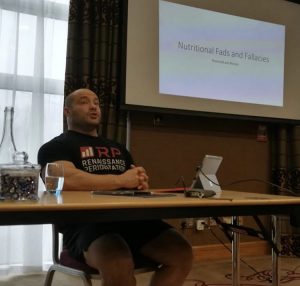 Fads are an interesting thing and can grow legs quickly – Mike talked more about why this happens. Essentially people have vested interests (want to make money mainly!) and after their angle is presented on the scientifically peer reviewed source that is the Joe Rogan podcast, things spread like wildfire….

Common fads were debunked and a few of the older coaches in attendance where reminded (and laughed) about the fads from back in the day, such as the anabolic effects of bee pollen – but I do remember a time when this was, in all seriousness recommended to me to help put some meat on my stems. Fads like Keto, Organic and Gut Microbes were scrutinised. The Organic piece in particular was an eye opener for me in that Mike underlined the fact that the definition of Organic changes from country to country. This tied into a piece on GMO’s and the fact there is no real science to back up that they are any healthier or, as with Organic, taste any better.

Why do fads appeal? WE ALL WANT THE SHORT WAY – well meaning people end up getting duped. Mikes delivery was like a (much needed) smack in the face, it may not be for everyone but it reminds me of me, therefore I thought it was great.

I find that questions around Keto diets arise regularly and Mike explained that essentially ketones are just a shitty source of fuel when driving athletic performance. They are the bodies last line of defence from starvation. One area that I have read about and heard a Keto diet helping is in terms of epileptic fits – fits are generally caused by hyperactivity of the brain and depriving the brain of carbs tends to down regulate brain activity. Again, when it comes to fuelling athletic performance, possibly outside of very long aerobic events, there is little evidence to back up any benefits.

Afterwards, James talked about more advanced principles of Recovery Adaptive strategies, applying them and how important it is to factor lifestyle into a program and even modifying lifestyle factors to complement particular phases of a training cycle.

Melissa presented a talk on nutrition for Vegan athletes. This is something that I found particularly relevant as we have at least 3 vegan athletes in the gym – a group that I have seen grow in the past few years (Mike mentioned how vegans are replacing vegetarians). Of course the main concern is how these athletes can ingest enough protein – taking ancillary carbs into account and BCAA’s being a factor too. Melissa addressed all of this in her lecture. 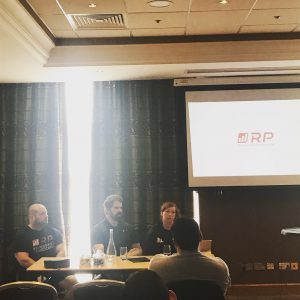 Q&A with the guys

The seminar then finished with another round table Q&A and again the low number in attendance ensured that everyone had time to get their questions answered and more time with the RP crew.

Overall from a content and fun point of view, the seminar was a massive success. I learnt a lot over the two days and was particularly interested in the guys personal experiences in dealing with clients and how they dealt with some of the more common challenges I see frequently in my own practice. Some of the insights were incredibly useful and I have changed how I will prescribe dietary information with new clients and also review how we measure dietary progress and body composition in SDSC – we are always learning and refining! 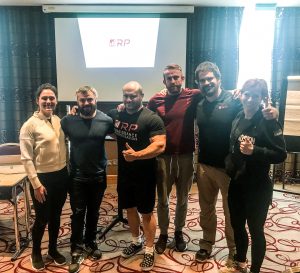 On a side note – and this was going to be a blog post in itself but it was probably going to descend into a negative observation, BUT organising seminars is always a pain in the ass. I would like to add this idea was Jason’s, so I will place all blame on him (lol) – in all seriousness the success of the weekend was down to him.

Jason approached me with the idea of hosting the RP guys a few months before, having met Mike previously. I was a bit hesitant as I have arranged seminars before and ALWAYS made a loss. I didn’t want to dampen Jason’s enthusiasm for the project so I went ahead with it. Initially I had reached out to a lot of people who all reassured me they would go if I set it up. Needless to say I didn’t see one of them at the seminar. I used to always say that probably 50% of people who say yes prior to the event will turn up, this time it was 0%. Excuses varied greatly but it is what it is – it is not a negative gripe as I have backed out of events in the past but more a warning to folks looking to set these things up – do it for the love of it as you wont make any money and will be let down in the process (even if you go in with moderate expectations).

There was a time when I started out that, in order to attend a seminar with the quality of these speakers, I would have to literally travel to another continent and invest a large amount of money and time. Coaches in this country today are incredibly lucky that they don’t even have to drive longer than an hour to attend a seminar like this and that guys of the calibre of Mike, James and Melissa travel to Ireland regularly now.

I am making this sound like a negative experience but I got to meet some new people and feel incredibly grateful to complete strangers for committing to make the weekend go ahead. I also fully realise that information before hand was scarce but this was down to factors outside of our control and we would probably set things up differently next time.

Regardless of that, the smaller numbers added to the intimacy of the event and I think everyone that attend got a lot out of it. I learnt a lot in the process. And again, personally, I am extremely grateful to everyone that made it and of course to Mike, James and Melissa for delivering such great content and taking the time to answer everyones questions.

We will hopefully get the RP crew back again at some stage in the future!