This is something I have been thinking about a lot lately as I have been nursing an injured wrist after an over zealous submission attempt from a training partner.

As always, I was asking myself if the injury could have been avoided. BJJ is a hugely rewarding and equally cruel sport. The risk of injury is always there regardless of how safe or careful you roll but the chance of such an injury can be minimized. Being selective with who you roll with is the first step in damage limitation.

With this blog post I am speaking from my own experiences, thinking back over the past decade of training and all of the training partners I have had and the bad experiences with certain partners. Looking back, there has been numerous times when I wish I chose my training partners more carefully. This has brought me to the following conclusions…

The first obvious choice would be to roll with people in and around your own weight class. In my opinion this is the most important choice  in injury avoidance and longevity in the game (if you are small this is even more important). Sometimes this is unavoidable and often times it is a choice that gets forgotten or gets brushed aside to safe face and not look ‘weak’. Put your ego aside.

The next obvious choice is to select a training partner with good hygiene. If someone hasn’t the decency to keep their nails trimmed, wear a clean gi and shower occasionally, they probably aren’t a good training partner.

This reminds me of a time early in my BJJ career when I picked up scabies from a training partner. If you think you have any skin infection at all, get it seen to before getting on the mats. The nature of the sport is that these infections can get passed around very easily and if you were unhygienic enough to get caught out don’t be the selfish asshole afraid to miss training and instead put someone else out for a few months. Almost ten years later I remember the guy who passed on scabies to me and I haven’t rolled with him since.

Getting the obvious out of the way, here are some more things worth looking at in order to advance your game as quickly as possible…

Something that makes a shitty training partner more than anything else is ego. This is the number one thing that I see which stops people from growing and improving their game – I have fallen into the ego trap numerous times over my decade of martial arts training. The fear of tapping or losing forces us to stick to our ‘A-game’. We play the same game over and over again. This isn’t necessarily wrong but it completely stifles creativity and expansion. 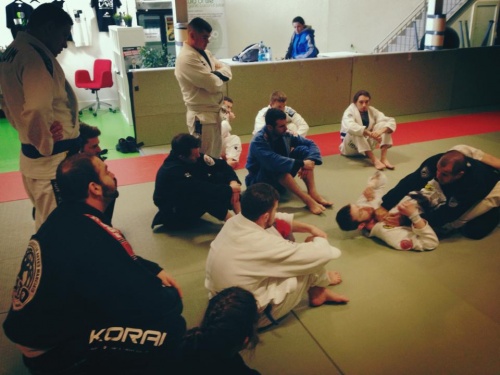 A training partner should be viewed like a puzzle. They should present problems that you have to solve. That should be the view from both sides – collaborating to find solutions.

The fear of losing or giving up good positions often sees people stalling or locking down positions and leading to a stalemate. Stalling in training is ridiculous. If a training partner stalls constantly or tries to lock positions down during a roll, they are not a good partner.

Staying on the theme of ego… If you train with someone at a higher belt, even doing drills, show respect. We are quite relaxed about hierarchy in BJJ compared to other martial arts but this can be abused at times – even if it is someone from a different team.

A lot of times I’ve heard of guys going to a different club or an open mat session and sparring someone that was a higher belt. They might have caught them in something or have been on top for the whole round and then come back to their respective clubs and say, ‘ I was rolling with such and such a guy and he was shit’ or brag about dominating for the whole round, etc…

A lot of times talking to higher level guys, what happens is that they are trying to play a certain game, purposely putting themselves in bad positions or working on escapes – not letting the other person know.

This doesn’t happen all the time, sometimes you can catch a higher belt, that’s just the way it goes, but respecting the art and others is important. If you start talking bad about people behind their back what happens is ultimately you are just feeding your own ego and increasing the stakes as such, making it more difficult for yourself to tap or lose (and thus going back to your ‘A-game’). Getting beaten is the nature of the art and it forces us to adapt and grow.

It is not a sign of weakness to be humble. The best guys I have met are the guys too busy getting on with their own training and don’t waste their energy or time bad-mouthing others.

The person that starts a roll by saying ‘lets take it light’ and 10 seconds later starts rolling like its the finals of the Mundials, is not only a bad training partner but a liar and an asshole. 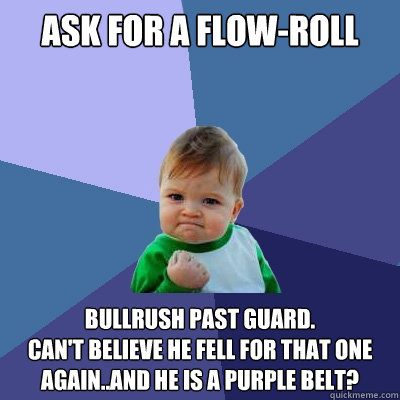 Someone that rolls 100% all of the time is probably not an ideal training partner in the long term. They are not a useless training partner – they are useful in certain situations, maybe when you are approaching a competition and you need to have that intensity present in your training so that it is not a shock when you do actually compete and you are against someone that is going 100 miles an hour. But for your own longevity in the sport – and I speak from experience – it is probably not going to be beneficial training with someone that spars hard all of the time.

Cross training is definitely something that I feel is important and beneficial but because of politics in BJJ, cross training is frowned upon a lot of the time and that stifles growth. This is why it is important to get the training partners in your own gym to commit to growing and improving as well.

Online training such as MG in Action and the Mendes Brothers Online are really useful here because you can learn from other teams and coaches without having to join other schools.

So what can be done to improve learning and training together?

Establish your training goals and plan in advance. You don’t have to write up contracts before you train but certainly having an idea of what you want to train before you go training or step on the mats is essential. If you want to work on standing passing or half guard sweeps, map something out.

Unfortunately we don’t have the luxury or ability to train three times per day, so we need to make the most of the limited time we have. It does take a bit of work to plan in advance but the benefits of that extra bit of work outweigh the inconvenience of having to spend 5 or 10 minutes putting a schedule or plan together.

A good training partner is…