As some of you know, we had Matt Wichlinski over at the gym last month for a Strength Shop Athletic Seminar. Matt is an extremely well respected Strength & Conditioning coach, made famous by his awe-inspiring youtube channel (check it out!). He is currently based out of Fort Lauderdale, Florida but was initially in Virginia Beach, where he ran The Strength Shop.

Matt’s training philosophies are all about training the body as one unit, getting strong at the big compound lifts, being athletic – training for performance, keeping movements natural and moving the body in a ways that we were designed to move. I would have similar views to Matt on training and we have a strength bias in our own gym here at SDSC and these similarities have led me to gravitate towards Matt’s style of coaching and programming. 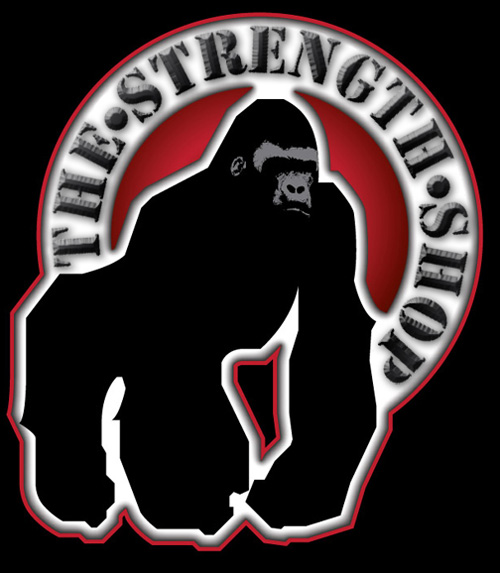 It was through the youtube videos that I initially found out about Matt and since then he has been a huge inspiration in my own training (and for many others around the world too). I was prompted to write him an email just to say how much I enjoyed the videos and within a couple of hours I had gotten a reply from him thanking me for the mail. This blew my mind, not only the speed of the response but the fact he actually replied (I am sure he still gets tonnes of similar emails daily). I have spent time with other coaches around the world and I can easily say Matt has the most time for his followers – and, for the most part, keeps his cool when probably being asked the same question for the thousandth time.

I really admire Matt’s philosophies on coaching and training and they resonate strongly with my own. In an age of information overload he is someone who brings it back to basics and cuts out a lot of bullshit (and there is a lot) in the training world. Matt’s ability to improvise and bring expert coaching with minimal equipment and adapting to any training environment is a talent that most coaches don’t have and it is an ability he has clearly spent years perfecting. You can have the greatest facility in the world but if you can’t coach or at the very least have an eye for decent movement, an ability to communicate with different types of people, that facility is doomed. With him, it is all about the movements, creating the right atmosphere and relative intensity to get the most out of your current environment.

I began to build up a rapport with Matt, having signed up for his online coaching and then one day through facebook put out the suggestion of him doing a seminar at South Dublin Strength & Conditioning. Matt seemed keen and the rest, as they say, is history. I had been waiting for almost a year for these seminars and I wasn’t disappointed. Matt presented two workshops over the week, the first for beginners and the second for more advanced athletes.

The initial workshop began with a small talk on goals and defining what is important to us and cutting out what isn’t needed or useful to helping us achieve our targets. Again, we are living in an age of constant distractions and learning to discard what we don’t need and what distracts us from our goals is VITAL. From there Matt took everyone through a very comprehensive warm up and talked about tweaking the warm up depending on what the following workout will entail.

Once everyone was warm and fired up we moved onto some basic tumbling and gymnastics movements. Once the forward rolls were down and folks were improving their body awareness, it was time to get upside down! We moved onto walk walks and handstands and focused on trying to remain in a hollow position whilst upside down. Then we had a look at frog stands, tuck planches and straddle planches. These movements were new to nearly everyone present but everyone had a great time and could see the benefits gymnastic movements brought such as improved body awareness and co-ordination. 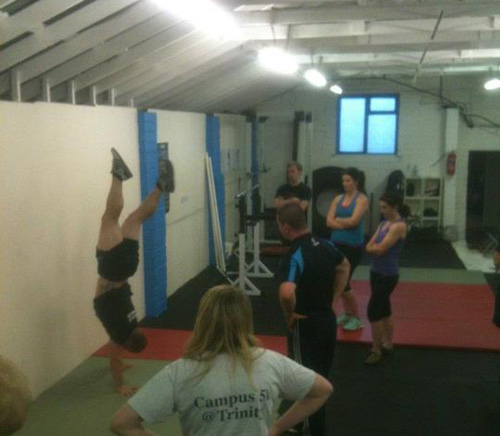 Once the gymnastics movements were looked at we then moved onto the Olympic lifts and broke the movements down and drilled positions. What struck me from a coaching point of view was Matt’s ability to coach all levels at the same time and keep everyone interested. It was cool to see and hear different coaching cues (as a coach we can fall into the trap of using the same ones over and over again) and also the clarity in which Matt delivered these – I particularly liked ‘an almost straight arm is still fucking bent!’ while explaining the importance of a straight arm in an overhead squat. The following week I brought a lot of the cues and progressions into coaching my own group the snatch and felt the class ran much smoother (thanks Matt!).

The second workshop was aimed at a more advanced level and there were a lot of coaches from other gyms in Ireland present. Again, the structure of the day was quite similar to the first workshop. We started with a comprehensive warm up and focused on joint mobility.

From there we worked on the gymnastics movements and had a bit more time to do so. The more advanced gymnastics movements were new to most and it was great to have someone of Matt’s experience go through the movements and especially to be able to coach at the present moment (as opposed to online) and explain the nuances and subtle tips that only someone who has trained the movements for years would know about. Once again we covered hollows, arches, frog stands, tuck planche, straddle planche. Then it was onto the rings to work the hollow, muscle ups and tuck / straddle levers. 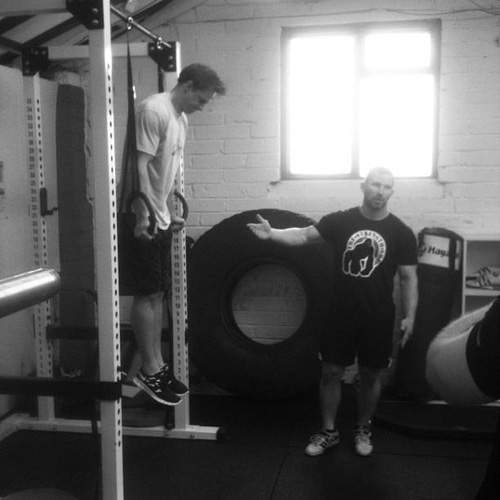 Working the hollow position on the rings

After the lunch break it was all about the Olympic lifts. Looking at the Snatch from the hang, high hang, mid hang, low hang. And also talking about building strength before going all out in the dynamic movements – for example, there is no point in chasing a body weight snatch if you cant overhead squat body weight or if you have never attempted behind the neck presses or push presses.

At the end we were also treated to a small talk on programming and all in all, the seminar went almost 3 hours over! I was struck not only by Matt’s generosity in giving us this time but by his passion for movement and fitness – this was evident to see and was infectious. It was great to see someone with so many years training get excited by helping others on their journey.

From a personal point of view, it was a great achievement to get Matt over to Dublin and to teach a seminar in the gym. It is very much like the old Strength Shop and although it may have been a little early in the gym’s short life to host such an event, Matt’s ability and ingenuity not only made it possible but a great success!

I have learnt a lot – not only in performing certain movements but also in coaching movements and it has further ignited my passion to keep spreading the word of strength and athleticism for all levels here at SDSC. I am already looking forward to the 2013 Strength Shop Euro Tour!

I recommend checking out Matt’s blog and youtube channel for more information and if you are in Dublin looking to train in a a gym with a similar philosophy to Matt’s, check us out!