Those of you in the gym will know Cormac well and have seen some of the progress he has made recently with his goals of leaning up. When he first came to SDSC he initially wanted to bulk up and once he achieved this target, his next goal was to ‘cut’ to 84kg.

When Cormac sets a target it just a matter of when he’ll achieve it as opposed to will he achieve it. Talking to Cormac – and seeing his results, he is 100% dialled in to the process and doesn’t get side tracked.

Here is a great write up from the man himself, documenting the great progress he made cutting down from 93kg to 84kg – bearing in mind he was lean at 93kg!

Recently I underwent a ‘cutting’ diet regiment, coming down from 205lbs (93kg) to 185lbs (84kg). The aim of this 20-pound drop was to cut down my bodyfat but also with the goal of retaining my strength and PR’s from my 205lb weight. I started around February 1st and finally reached my goal on the April 3rd.

When I started I thought this would be somewhat easy; a lot easier than bulking up to 205lbs in the first place (which took me about three-and-a-half months to get to from 190lbs). Having finished it, I’m not sure if I can say it was easier, but it definitely wasn’t as fun as bulking up.

The first couple of weeks were fairly ok; obviously diet is key, so I just made a few adjustments to my existing diet, which is more or less what can be seen here. I skipped carbs in the evening and dropped taking my ‘Mega Shake’ (a 1,000+ calories shake). Within a few days I was about 200lbs, and within about four weeks I was hovering just over 190lbs. I think if I was to eat in any sort of ‘moderation’ my natural weight would probably be about 193lbs.

So cutting was unravelling as easy as I thought it would be; my PR’s were largely intact and even growing in some cases and I wasn’t spending 45 minutes every morning and trying to eat porridge while stuck in traffic. Everything was tickety-boo.

But then it started turning dark and disturbing, like Full Metal Jacket after the Sergeant Hartman scenes.

The first problem I ran into was my troublesome knee. Having put up with tendinitis for the best part of 5 months, coupled with a knock, my physio regretfully informed me that I would have to park all leg-related exercises – squats, lunges, even certain everyday stretches. Most prevailingly, however, was that running and rowing were now out of the question, so burning those unwanted calories and losing weight would be dramatically slowed down.

(Quick plug for SDSC here: Having informed Dave and the trainers of my injury, they were instantly able to offer alternative exercises for me to do, that were just as challenging and rewarding as the exercises I was missing out on, without putting my knee in further jeopardy. Their advice for exercises and diet have been integral to my gains over the past 9 months.)

The second issue was that I had dramatically underestimated how easy it would be to lose the final five pounds. Considering that I hadn’t been any lighter than 190lbs for about two years, I was taking my body to a place it hadn’t been for a while.

After being stuck at 190lbs for about ten days, I went to Dave and he brought up an article he had previously mentioned to me (BiggerSmallerBigger.com) which is the diary of an athlete who put on 21lbs in 28 days, then lost the same weight in 5 days, and then regained 18lbs back in the following 24 hours in an MMA-style weight gain/loss/pre-match gain cycle. It’s a great read that I recommend to anyone looking to see what it takes to gain quality bulk and what athletes go through in order to make weight for fights.

So, in order to lose the last 5lbs, I decided to take some further measures. The first was changing my diet – I had already reduced my breakfast to 2 rashers and 2 eggs (down from 4 eggs, to 3 eggs) and other little shavings like that off my diet. Here is the diet I was on for the final two weeks of the cut:

Soon my plateau became 188lbs. After about 5 days of being unable to lose three more pounds and quickly losing hope, I decided to pick up the kitchen and take aim. Being resigned to the fact that I couldn’t run or row, I did the next best thing I could do (apart from swimming, which I haven’t learned to do yet): I walked. I started walking to training, walking to the shop and just taking a 30-45 minute walk in the evening.

I also reduced my water intake, coming down to about 1 to 1.5 litres of water a day. By this stage I was fed up and pissed off, and at work I was on autopilot. I would eat my dinner and be just as hungry after it as I was before it. I hadn’t taken a satisfying bite in weeks. But within two days I was down to 187lbs.

I realised that the way I was going it would probably be 4-5 days to reach the goal. To me, that was 3-4 days too long. There was one thing that I hadn’t tried yet: the hot-water immersion bath. Seeing as I was only looking to lose two pounds, and I wasn’t under the pressure of making weight for a UFC title fight I decided to not replicate the professionals exactly, going for a much more scaled-down approach but challenging none-the-less. The idea is take a bath with the water as hot as you can possibly take in order to reduce your body’s water content. Seeing as my bath’s hot water tap wasn’t working I went for a shower instead, spending about 5-10 minutes in there. NOTE: These can be pretty dangerous and there’s always the risk of passing out which, in a shower or a bath, can be hazardous to your health to say the least. Do your homework before you attempt to do them, and don’t be a hero.

Finally, one day later, on the morning of April 3rd, roughly 9 weeks after starting, I made it to 185lbs. Any bodyfat dropped from about 9.5% to 8%, a return I’m delighted with. 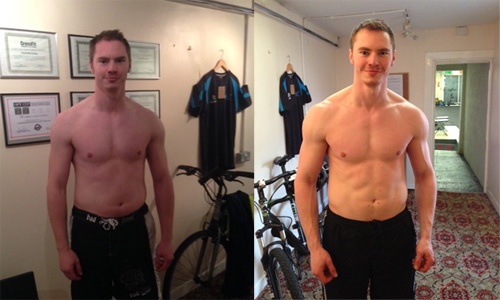 In conclusion, this was hard. Very hard. And not fun. The only thing I can equate my thoughts about food in the last three weeks to are the thoughts I used to have about Sarah Michelle Gellar when I was a teenager. As soon as the final bodyfat readings were taken I went home and celebrated with a big steak, a big salad and a big portion of mashed sweet potato with a big hunk of creamery butter, followed by a protein coffee (it exists!) and protein pancakes with banana and honey. 24 hours ago I had just weighed in at 185lbs; I sit here now at 192lbs with a smile on my face and a song in my heart. My next goal now is 210lbs. Despite the hours of preparing and consuming food everyday for the next couple of months, I vow not to complain. I’ll save that for the next cut.