Well, that’s another year nearly done and it’s always a good time to take stock, not just as a business owner, and look back over the past 12 months. It’s a time to be grateful for all the good things that happened (and they did) and also see what didn’t go so well and plan to rectify those issues in the coming 12 months – in all areas of my life.

Only last week I remembered this article from last year and it made me laugh. My opinions and viewpoints are very much the same but now I would probably deliver the message slightly differently, maybe I’m mellowing in my old age or else I was just particularly angry this time last year.

That article got a fair bit of response and a bit of hate mail, funnily enough from people that I’ve never met. It definitely struck a cord with a lot of people and they either loved it or hated it. I think the folks that loved it were coaches and trainers in a similar position to myself – trying to survive over December and seeing the standard monthly income drop dramatically or the folks that hated it, well, we probably know why that was…

Thankfully this year I have been too busy keeping everything running and I haven’t had much time to put together my yearly tirade. Instead of just getting angry about peoples dwindling drive and motivation I really want to ask people that are falling off the rails, why?

I have seen quite a few people over the years that get very close to long term health and fitness goals and just as they are about to get there, they hit the self destruct button. 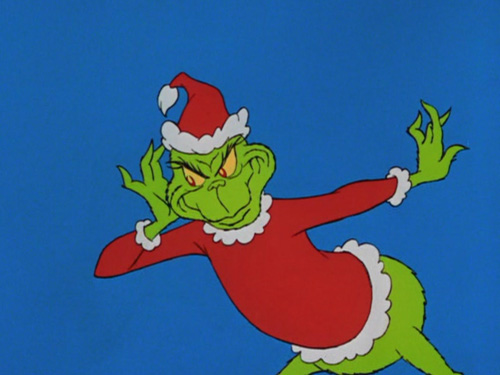 The Grinch is waiting to hear those New Years resolutions...

This is not uncommon and being a trainer takes an awful lot of planning, motivating, coaxing (bribery!) and it really is a study on human behaviour. I always smile when I see newly qualified trainers blow on about how they just want to train people and don’t want to hear about their problems, that they are coaches and not psychologists, well news flash, you are fucking psychologists and as soon as you get your first client, you are very much in the trenches of human behaviour and have just engaged in the eternal game of mental tug and war.

Different things motivate different people. Have a plan, figure out what motivates you.

Why do you want to be healthy? What are your goals? Your actions and values have to be aligned. If it’s just to turn up and train then great (at least turn up!) but if it really is to improve body composition, to compete or to get stronger, you HAVE to align your actions with your goals. I have said it before; great results don’t happen by chance.

Understand that if you are looking to lean up and lose weight, drinking a boat load of booze (or even moderate amounts, depending on where you are) will not help you achieve your goals.

Its no secret that I would be influenced by OPT’s training currently and especially in his methodology and philosophy when it comes to dealing with clients and I heard him talk recently about folks that train regularly, know that they should be eating well yet refuse to…

“You do understand that if you don’t turn on the lawnmower, the grass won’t get cut? Ok, well go on then and go and ride it, ride around all day, go for hours and hours and let me know what that feels like after you’re done.”

The above conversation may seem ridiculous but I see it happen all the time. As a coach, there is nothing more frustrating – especially after it has already being discussed – seeing people train and get frustrated with lack of results when their own actions outside of the gym (or lack of effort in the gym) have not aligned with their goals. Think about this folks.

A great exercise over the holidays would be to put some time aside and really think about what you want from your training in 2013.  Put your goals down on paper, you don’t have to tell anyone but this bit of paper should be somewhere that you can refer to every so often. Make sure your target is defined – not ‘I would like to get stronger or lose some weight’, but instead, ‘I want to get a double body weight squat by the end of 2013’ or ‘I want to lose 6kg and keep it off by the end of 2013’. Numbers folks, be specific.

We are always put in a position to make a choice and we will chose the option that we perceive to give us the least amount of pain or discomfort – usually its a case of what will give us immediate gratification, ignoring the long term pain a poor choice will bring us

Before people start getting too precious, I would like to underline that Christmas is most definitely a time to be enjoyed, yea it’s been a tough year but it’s been tough for everyone. If you are going to go wild then do so, and enjoy it but God help you if you come back to me in January frustrated with training because you’ve put on weight or your numbers have dropped. Make your choice, do you want to stay at the peak of your current health or go mad over Christmas, it’s your call, deal with the consequence either way, you are 100% in control of your own decision.

I have to make choices too. I amn’t immune to life getting difficult or throwing obstacles in my way when it comes to training. I amn’t going to get beaten up or frustrated by this, I have adjusted my goals accordingly so as I won’t get more stressed by my situation. My plan for the remainder of 2012 is modest – I want to get 7 more Brazilian Jiu Jitsu sessions in by the end of the year, I will attempt a 500m and 1000k row time trial and will attempt a current double body weight squat at my current body weight (ideally before Christmas day!). My diet will not be great (but this shouldn’t affect my above targets much) and after the SDSC Christmas party (!) I will be limiting my alcohol intake to the 24th and 26th (I’ll have to drive Christmas day). Simple, nothing ground breaking, I have made my choice, kept it realistic and won’t get too stressed in the mean time.

Have a great Christmas and make sure to put some time aside over the holidays and get planning for a successful 2013!