In my opinion, Ab Wheel rollouts are one of the best exercises for strengthening the anterior core. One of the main reasons I prefer this movement over the conventional choice of crunches is that it requires the core to contract isometrically, resisting against movement. It doesn’t require the spine to flex and extend, which, when going through the motions can cause lower back problems – especially when exhausted (usually the case as most core exercises are thrown in at the end a workout).

As with most movements there can be a risk when jumping right in. There are a few things that if gone unchecked can cause problems, so I am going to try and go through the main culprits.

First up, regarding volume it is best to err on the side of caution and perform a few reps initially and build up over time – same goes for range of movement. Only work in ranges you can keep a hollow trunk or more ideally a posterior tilt in the hips (it is imperative not to let the hips tilt forward during the movement). For most folks, achieving this hip position is a challenge even when resting. A lot of individuals tend to be in anterior pelvic tilt and this can lead to back pain – ESPECIALLY when performing this movement, so be careful! 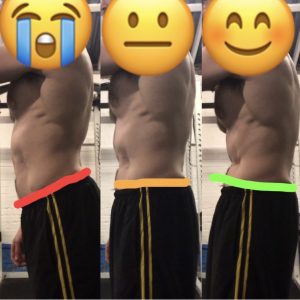 Any pain or discomfort in the back during this movement usually means the hips have gone into anterior tilt and the abdominal muscles have essentially switched off. You may need to decrease the range of movement if this happens. Alternatively go back to Swissball rollouts or RKC Planks and build core strength there before moving back onto the Ab Wheel.

Make sure to keep the glutes squeezed tight and even squeeze the legs together as this tension will help stop the hips from tilting forward and help keep the lower back flat. It is preferable to do this before you start to roll the Ab Wheel forward.

You can use a bench or a wall to act as a spotter. Initially it may be best to start close to this ‘spotter’ and once you can perform the movement in a partial range and with a posterior pelvic tilt, start to move further away from the wall / bench and increase the range of movement.

Things to watch out for…

Other than keeping the lower back slightly rounded and hips in posterior pelvic tilt, there are a couple of things to look out for when performing this movement.

There are sound concerns over shoulder health and stability while performing Ab Wheel rollouts – I would find it hard to argue that they should be performed IF someone has a shoulder injury but all going ok, roll on…

One technique I stumbled upon through trial and error is to try and ‘snap’ the wheel in half. This tucks the elbows slightly and creates tension (more stability) across the shoulders and should retract the scapula slightly. I find this helps to keep the shoulders engaged and under less strain when performing the movement at full range.

Returning with the wheel…

A lot of times folks think the movement is done on the way back but a lot can still go wrong if you switch off.

On the way back, it is common to try and drag from the arms, instead try to squeeze your knees towards your hands and pull through the core – which helps to keep tension in your midsection.

DO NOT bring your arms back first under your shoulders – I probably shouldn’t need to go into detail here but when this happens, there is no core involved, midline switches off, arms accelerate under your chest, face falls forward and meets floor at speed. Not good. Stay switched on when on the way back.

Everyone talks about ‘good pain’ – which really only ever seems to apply to abdominal muscle soreness for some reason (!) but you can most certainly experience the ‘bad pain’ on this movement too if you just dive straight in! I would recommend starting with 1 or 2 of sets of 5 reps and building up from there. I always go with quality over quantity when it comes to reps on this movement.

It is also a good idea to perform this exercise at the end of a workout so as not to fatigue the core muscles before performing any big lifts.

Ab Wheel rollouts are a great exercise for the anterior core – when performed correctly, when they are earned (time is spent going through the progressions) and exposure to the movement is executed sensibly. It is far too lazy just to say a movement is ‘good or bad’ and if the previous points are adhered too when implementing this exercise, you will be well on your way to developing a rock solid core!