In the past few days in the gym, we were wrapping up a strength cycle ahead of the Powerlifting competition coming up next week. We had a small number on Friday evening’s session (which is currently ‘intensity day’) and I decided to run a little tester to see where everyone’s neuromuscular efficiency was at, in relation to the bench press. 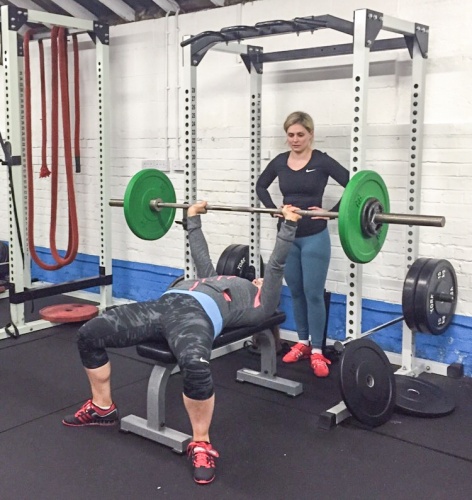 First up, what is neuromuscular efficiency?

Basically in simple terms (those that I can interpret and relay) it is the nervous systems ability to properly recruit / communicate with the muscular system in order to move loads.

What are the benefits of improving neuromuscular efficiency?

How do we measure neuromuscular efficiency?

The best way to do this is to establish a 1rm in a given lift, rest (ideally for 5-10 mins) and then perform 85% of the 1rm for as many repetitions as possible. The number completed – along with a solid understanding and interpretation of the individual will give us a good idea of how ‘efficient’ the athlete is.

I have seen various tempo being prescribed for the 85% effort. Some stating a 2 second negative (20×1) and others a 3 second negative (30×0). I have watched various tests on youtube stating that they used a certain tempo but the video showed otherwise – and this is not a slight or criticism on any one video but it does raise a point made recently by Brad Schoenfeld at a conference I attended in Bath recently.

He stated that the only way to control tempo is ‘don’t train hard’ and that one cannot truly fully control tempo. Tempo training is very rarely max effort training, as with tempo work you are always leaving something in the tank and I do think that although tempo training is extremely beneficial, in a max effort setting it may skew results slightly.

I understand that having tempo makes things much more measurable going forward but to play devil’s advocate, will an athlete ‘lose’ reps and therefore alter results in keeping to a prescribed pace? I don’t know, it is something to ruminate on. For the record, I didn’t prescribe tempo for the 85% efforts in the class recently – as long as the repetition was performed through full range, that was sufficient in this context (and noting so if we were to repeat this test with the same group).

It is also worth noting that I do not like to test 1 repetition max attempts with lifters that have less than 3 months training – again I also believe that a novice lifter will not have an efficiently developed neuromuscular system and will not be able to ‘dig’ deep enough to hurt themselves and therefore their 1rm is probably a moving target and that alone would make the test non-applicable for someone with a young training age. Again, when training people – especially large groups over time, there are no absolutes.

Factors that influence NME and the scores of the test…

What can we learn from the results of the test?

First up we can learn more about the ‘essence’ of the athlete – possibly their muscle fibre bias and what they are ‘better’ at when it comes to training. Once we get to know this over time through tracking and the through the coaches interpretation we can build a map of the athletes strengths and weaknesses and depending on goals and sport we can decide to shore up weaknesses or play to strengths – something that tends to be overlooked in the S&C world, where the mantra is ‘you are only as strong as your weakest link‘ – how many folks have we seen with weak links crush it in their specific area of expertise? That could be the topic for another article possibly…

If a person scores ‘low’ on reps / shows to be more neuromuscularly efficient, they may benefit more from focusing on high percentages and volume of their 1rm. Work such as CP Battery / ATP (High Power / Short Duration) training + Anaerobic Alactic Power.

If a person scores ‘high’ on reps / shows to be less neuromuscularly efficient, they may benefit more from playing to these strengths and focusing on Anaerobic Lactic Power/Endurance and Aerobic Power workouts.

To throw another cat amongst the pigeons, the results for specific movements may vary and again this is where paying your dues through consistent and diligent training and working with a solid team will allow you to figure this out and create greater awareness around your own abilities, strengths and weaknesses and play to these depending on the task/event.

Please feel free to add your own observations and experiences to comments!