Well the row is finally over – it was looming over Jen and myself for a few weeks now. A marathon on a rowing machine was something I always wanted to do – I’ve never had an interest in a running marathon as I feel as though my knees wouldn’t hold up for it but a rowing marathon is something I felt I could do. I toyed with the idea of just jumping on and giving it a go last December but it never happened.

Concept2 run online challenges and there is a Global Marathon Challenge this month which gave me a nudge towards finally getting it done. I had a chat with some of the folks in the gym and we decided that it would be a good idea to raise money for a charity or cause and seeing as we are nearby, we decided that Our Lady’s Hospice in Harold’s Cross would be ideal. It just happened that the timing of this coincided with the Harold’s Cross festival, so it would be perfect!

I had grand plans for a solid training program for this but as the weeks went by my training changed (I had a bjj competition) and a few injuries meant that I couldn’t put much focus on rowing as I would have liked (although it did take up a lot of mental headspace as the 13th drew closer). Jen, in stark contrast had been training diligently and consistently and even though she was talking about some nerves, I had no doubt she would get through it. I genuinely didn’t know how I would get on…

We had planned to do the row-athon in the grounds of the Hospice but with the unpredictability of the Irish weather, we made a collective decision on Friday evening to get the row done indoors in the gym. On the day, Colin decided to get stuck in and row a half marathon too, with no training either!

The three of us got started during a group class, which was great to keep us distracted for the first hour of the row. Colin was holding a strong pace throughout and Jen was as consistent as ever. 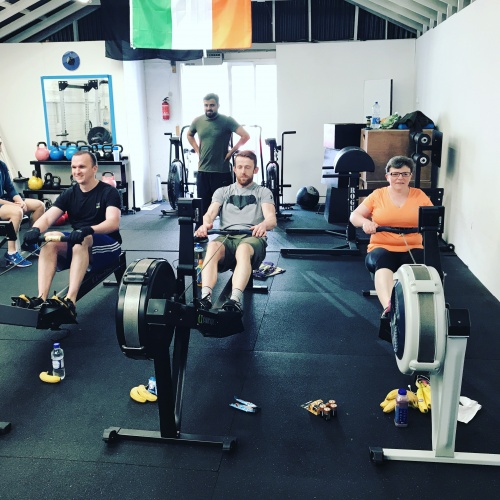 Before the mental games began…

As the class finished and the group dispersed, things began to get real as the sound of the flywheel drowned out the music in the background – at one stage I felt as though my hearing was coming and going with the monotonous hum of the rowing machine – much the same way your mind starts distorting a word when you repeat it over and over, and over. And over. This was one of the more subtle tricks my mind was playing on me. I was expecting to feel bad or hallucinate at some stage but it never really happened – I was obviously going to slow to hit the dreaded wall!

The middle distance was tough but every time I started to think about how much time I had left I began to get a little overwhelmed and panicky. At this point I had to remind myself that it was my mind playing tricks and I began to focus on my breathing. I had set little milestones in my head – 33,333m, then 22,222m and then 11,111m although my OCD felt a little cheated when the console jumped from 22,225 to 22,220!

The mental games started to resurface around the last 5k but it was nothing too crazy, as above, I just focused on controlled breaths to keep me present and centered. The only real discomfort was my backside and I found myself shuffling side to side after the hour mark and having to subtly adjust my backside on the solid plastic seat but other than that the whole challenge passed uneventfully!

Colin finished first as he was doing the half marathon and he stayed around to support myself and Jen as we soldiered on – which was much appreciated!

For me personally, a marathon distance was something I always wanted to accomplish on a rowing machine – especially as I feel as though my knees wouldn’t be able to do a road marathon. I believe the mental side of training is a massively under looked component and I wanted to see if I had the mental toughness to get the head down and battle through it as my preparation was less than ideal. I think this is an important theme to carry forward – that often times circumstances won’t be ideal but with the right mental approach, a lot can still be achieved.

It was great to have Jen and Colin get stuck in too, two great people that have had to overcome their own battles in improving their health and fitness. They have both overcome circumstances that would have derailed many others and they always manage to bring a positive attitude to the gym and never looked for excuses or the easy way out in anything that they have done. I was delighted to attack this challenge with them!

Of course a huge thank you to everyone that has donated so far – again, the lead up to this was erratic and I could have done more but the total raised for the Hospice so far is €800 (you can donate / see the total here), which is just shy of out initial target but excellent considering the last minute nature of the whole thing, so again, thanks a million to everyone that donated and that came down to support us during the row and afterwards!

Not at time I want to see on a rowing machine too often!

Maybe we should try an ultra marathon distance next time…