A few days ago I was talking to Cormac about his diet and adjusting it in order to keep his target of hitting 93kg in sight. When he was going through his ‘typical’ day of eating it had me thinking (again) that when it comes onto putting size (which is what roughly, in my experience, 90% of males under the age of 30 want to do) most guys simply aren’t eating enough or if they are, the aren’t sustaining the effort needed to eat that much and fall off the wagon after a few days.

I think everyone that trains with Cormac knows that he is motivated (he trains 6 times per week – and that is another challenge with this bulk) and any diet advice I have given him, he has followed 100%.

So as we were going through the last diet consultation, Cormac came up with the great suggestion of blogging about it and maybe it would give guys an insight into just how much food and effort it takes to put on quality size. Again, with the volume of training that Cormac is currently undertaking, I think his results so far have been outstanding – and 100% down to his effort and focus. I’ll let Cormac continue… 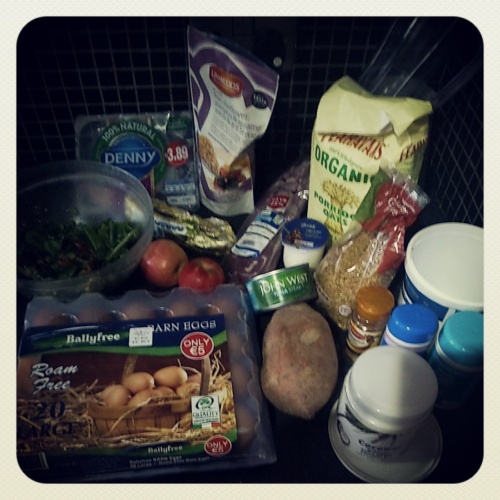 The above figures highlight my progress towards the goals I discussed with Dave on day 1 – “I would like to bulk up to about 205 lbs [93kg] but also be fighting fit”– I knew myself that that would be a tall order, but I also knew that either goal wouldn’t be mutually exclusive. If I could pick an ideal weight and bodyfat it would be 94kg and to go under 7% bodyfat – both very, very long-term goals. But goals nonetheless.

A bit on my background – I play junior hurling, which means that I play a match usually once every week or two weeks, supplemented by a training session time-to-time (being based two hours away from my club limits this) and have recently started Brazilian jiu-jitsu and MMA striking classes, of which I attend 2-3 times a week. This is all sandwiched within 3 sessions a week at SDSC.

With the aim of my fitness goals relying on a caloric surplus, this inevitably means that I have to EAT. A. LOT. Sometimes this means consuming almost 4,500 calories a day. Using a calorie-tracker program called myfitnesspal.com I can submit what I have ate that day and how much more I need to go to fulfil my daily intake (or if I am under/over my recommended daily allowance of protein, carbs etc). I highly recommend using this program.

Here is a synopsis of what I eat on a daily basis:

Mid-afternoon (it’s the same as mid-morning):

So that’s a usual day. I’ll admit there’s not much variety but it doesn’t bother me – I know that this is the fuel for where I want to be so I am happy to do it. I hate custard, but if you told me that to get to my goal I had to eat it morning, noon and night in a split-second I would have a spoon in my hand ready to go.

The benefits are obvious; so is the daunting fact that that is a lot of food. I spend a good portion of my time shopping and preparing breakfast, lunch, dinner and snacks. But it’s definitely worth it.